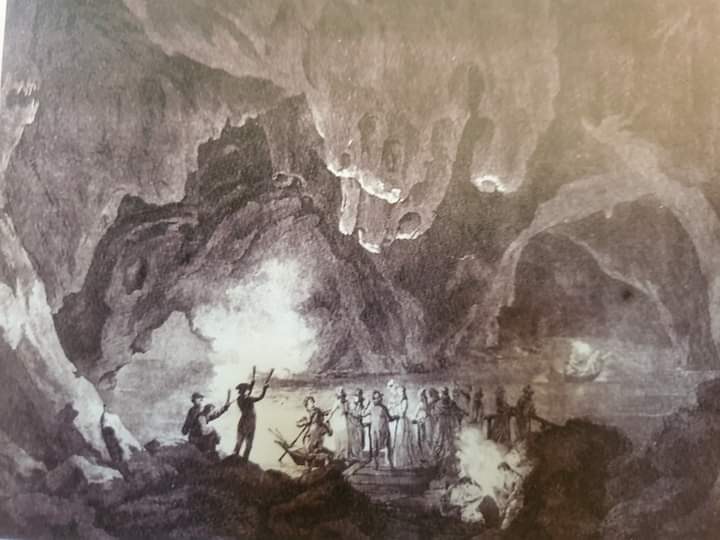 Many geographers and writers, since 1500, describing the beauties of Capri, the island of Tiberius, speak of a large and mysterious sea cave that opened on the southern coast of Capri, below the Certosa di S. Giacomo.

But it is the detailed descriptions in 1701, by the traveler Joseph Addison, discovering Southern Italy, which make us understand the geological importance and the naturalistic beauty of this sea cave.

The English writer calls it Oscura because it is poorly lit, despite being a hundred meters wide. Its high ceiling was studded with hundreds of stalactites, while white stalagmites rose from the walls.

In 1808, a few months before the capture of Capri by the Napoleonic troops of Joachim Murat, a ruinous landslide caused by an earthquake caused the Certosa tower to collapse, which served as a sighting for the Saracens’ raids, on the entrance to the Grotta Oscura.

Since then, the mysterious cave was no longer open to visitors. A few years ago, the CNR made several drillings along the ridge of rock below the Certosa to find the famous cave.

Unfortunately, all attempts were in vain. Many historians have also hypothesized a connection between the Certosa garden and the mysterious sea cave.

It was his death that prompted the notary Giuseppe Pagano, owner of Locanda Pagano, to accompany the writer August Kopisch and the painter Ernst Fries to discover a cave that the people of Capri had called for centuries the Grotta di Gradola, or for its color Grotta del Devil.

On August 17, 1826, the Blue Grotto was discovered which was later called Azzurra.

The Dark Cave was also a real obsession for the painter Karl Diefenbach, who fantastically represented it in many paintings as a symbol of Theosophy, the religion of darkness and light.